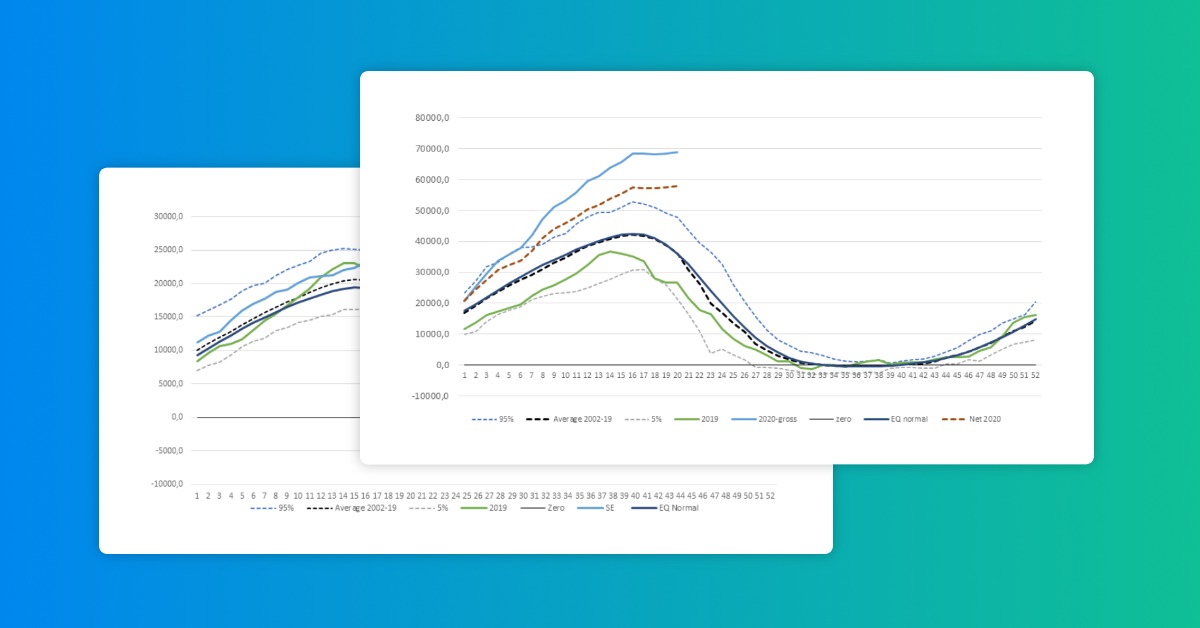 The risk for severe flooding and water spillage in the Nord Pool is on the rise. The reason is that the latest observed temperatures, and forecasted low temperatures, expectedly will further delay the melting process. Inevitably this will shift the melting to occur during periods with higher temperatures than previously expected.

The effect, in terms of inflow, is monitored and forecasted by EQ’s hydrology. Below you can see some details in this.

Be advised that, the summer the situation is rather unchanged: We still expect strong spillage from reservoirs in Norway, given normal precipitation levels through the spring and July.

The snow/groundwater reservoirs are in Norway, Sweden and Finland close to all-time high levels.

For Norway, the Norwegian water and energy authorities (NVE) are giving weekly updates of the flooding risk during the spring. In their announcement on 27 April, the conclusion was that despite very high snow levels in Norway, there is a limited risk for extreme flooding because of normal temperatures and precipitation below normal.

EQ has not observed any flooding signals from Sweden and Finland yet despite very high snow levels in some regions.

Cold weather and low inflows until end week 20 (17 May)

The latest weather forecasts (as of 6 May) show significantly lower temperatures than seen in the forecasts last week, see chart below for Norway.

Temperatures during the upcoming weekend and start of next week will be about 5 degrees below normal. That delays the melting process, the inflow will not increase (as it usually does in early May), and the snow levels will not decline. The latest forecasts for Sweden, however, shows that inflow levels could reach normal levels at the end of week 20. See inflow forecasts for Norway and Sweden below.

Snow levels for Norway and Sweden

The very low inflow levels and moderate precipitation means that the snow levels remain more or less unchanged until the end of week 20 (17 May).

In the charts below, you see the current snow levels for Norway/Sweden in comparison to normal and the 20 years variation band.

Notice that the snow/groundwater models are run as gross models, while the statistics are based on the net levels where the spilt water is subtracted. For Norway, we have made a preliminary net curve as we expected about 11 TWh spillage this year.

We see how the 2020 snow curve is nearly flattening out weeks 18 – 20, in a period where we usually see the start of the melting season. The current situation is, in fact, extreme and the flooding risk for the spring has increased from last week.

The Swedish snow reservoir is at a 20-year all-time high too, and we expect about 30% higher inflow than normal during the weeks 21 – 33.

EQ follows the situation and gives you updated reports during the spring and the summer. 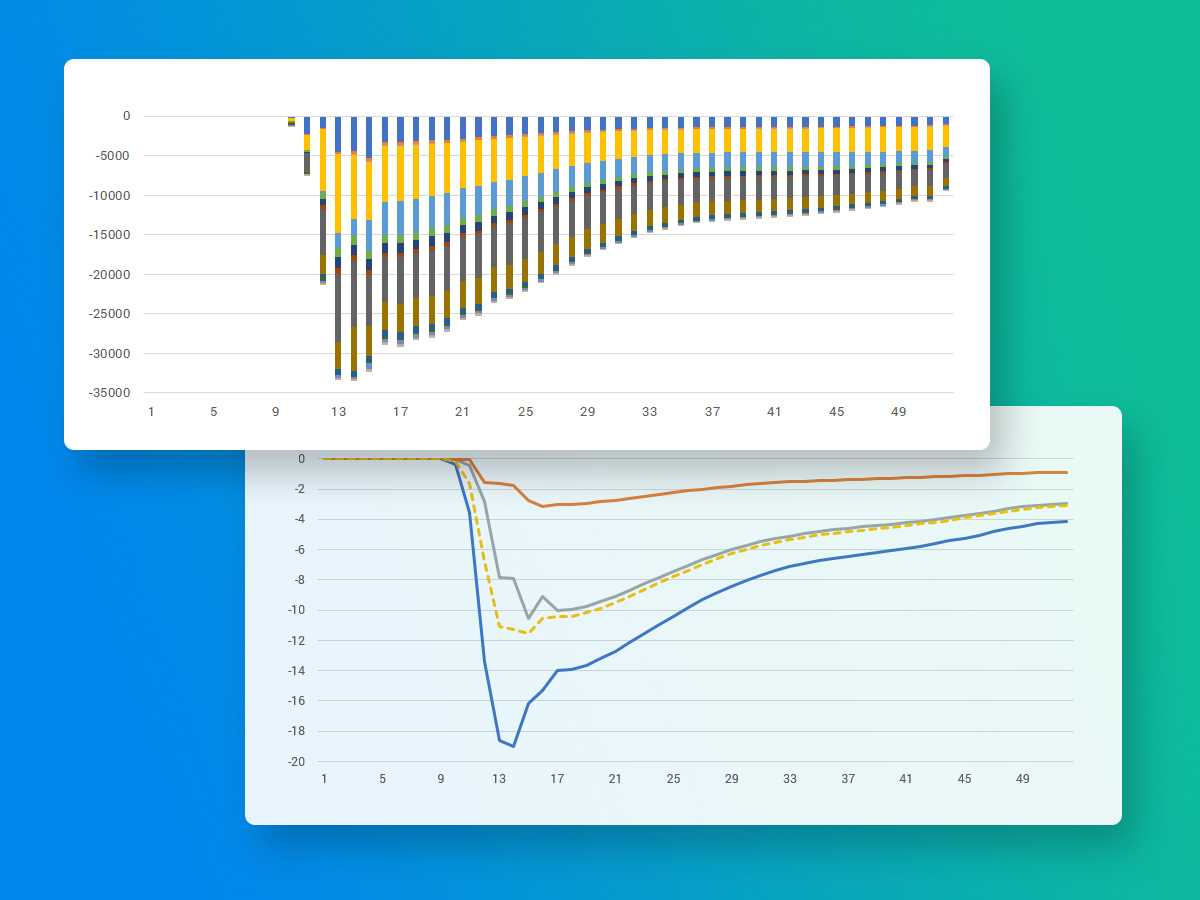 The near future is uncertain, both for how to combat the Coronavirus epidemic and for the economic outlook. EQ has studied consumption development so far and simulates some scenarios to show possible paths of recovery towards New Year. 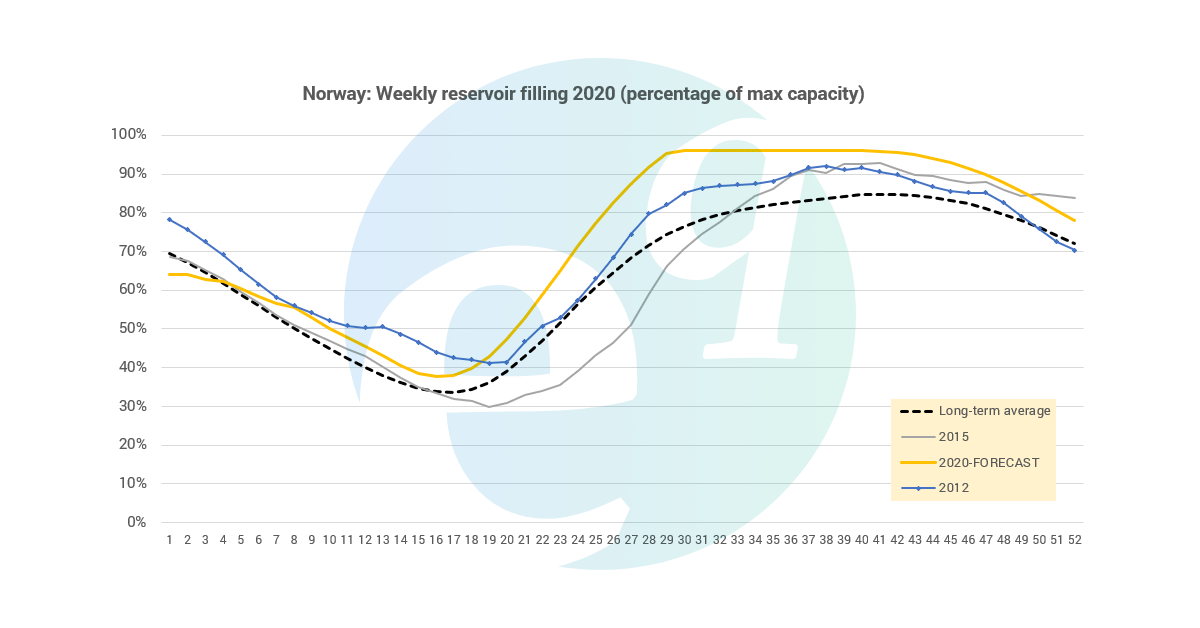 The snow- and groundwater level at the end of March was at the highest level for the last 20 years, and the water reservoir filling is also still significantly higher than the normal. We expect the hydro reservoirs to be full mid-July and, given normal weather conditions, 8-10 TWh water spilt. 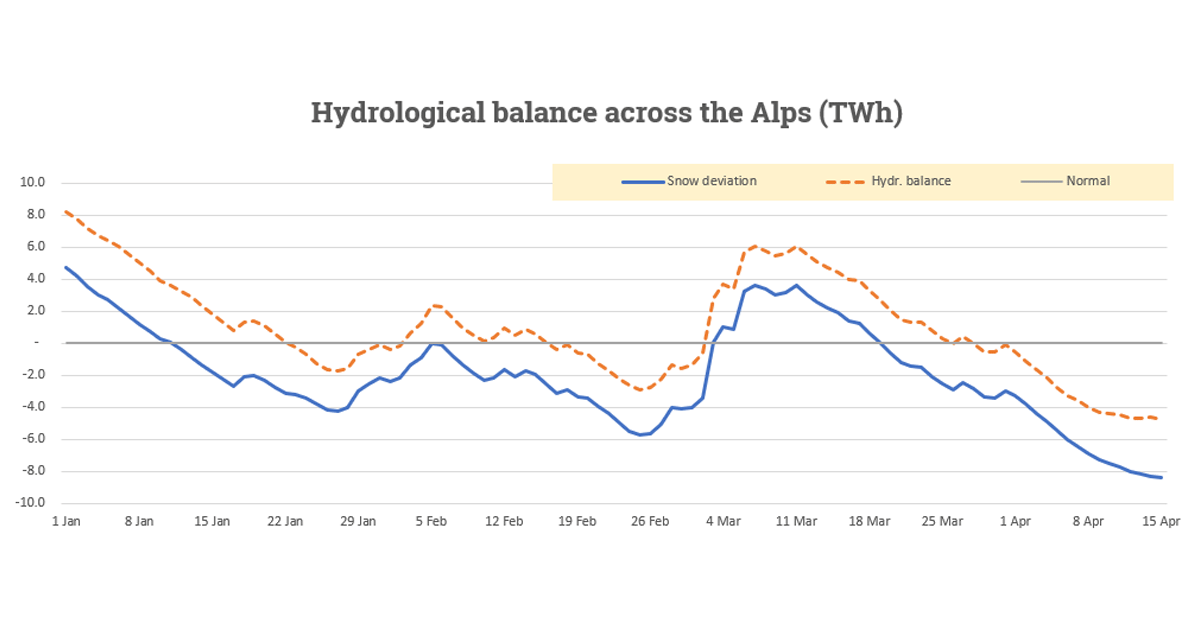 The hydrological balance in the Alps areas dropped 9 TWh over the last 30 days, EQ's hydrology analysis shows. That translates to a 4000 MW shortfall for every hour during a 3-month summer period. The reduction in the hydro resources varied much among the four countries included (Austria, Switzerland, France and Italy).