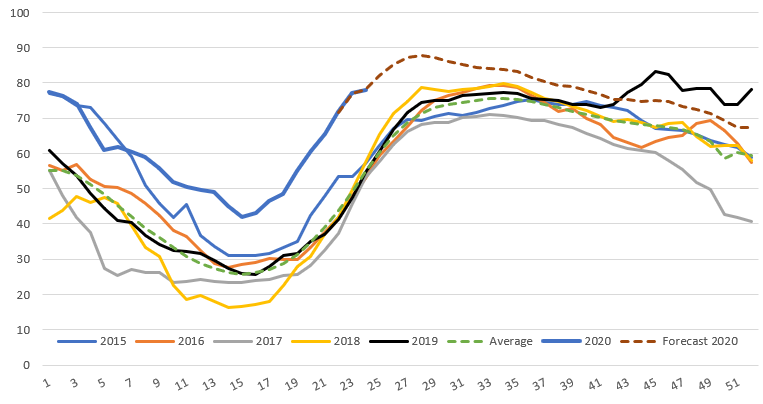 EQ on Wednesday forecast France hydroreservoir filling will reach close to 80% of max capacity by the end of next week (wk 24) and will continue rising given normal levels of precipitation and inflow.

Hydro reservoir levels in France have been high and rising since last autumn, and are now about 25% higher than the normal of 55%. Key takeaways from our latest forecasts are:

The forecast 2020 curve represents an estimate of the reservoir filling given normal inflows and higher production than normal:

The hydropower production forecast for week 24 and onwards shows about 130% of normal production during July (+1,500 GWh/+1,700 MW compared to normal)

This means that hydropower production during July will be close to the levels at the start of June, and partially compensate for the low nuclear capacity before the holiday period in August.

For the 2nd half of 2020, we estimate production will be about 17% stronger than normal, which translates into about 4 TWh. This is not, however, enough to compensate for the low nuclear capacity when the holiday season ends at the start of September.

In conclusion, the French power balance will improve until the end of July, but the hydropower resources will not be able to compensate for the planned reduction in nuclear output in Q4.

EQ's hydropower forecasts cover all of Europe and include all aspects of the hydrological system, including evaporation, river temperatures, snow and groundwater levels, etc.